Game of the Week – Skyfox 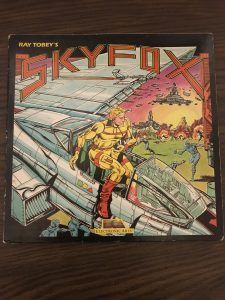 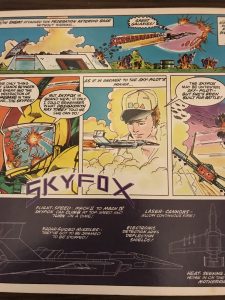 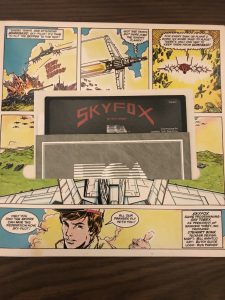 Air combat simplified. You are the only hope for the base in your Skyfox fighter plane. It’s supersonic, it has laser guns, and an autopilot that finds enemies. You can train or fight in a full invasion. It’s an out of the blue original with an unoriginal storyline but no actual popular culture root for the specific Skyfox story. It has a short comic strip on the inside of the box and that’s the extent of our understanding of the Skybox universe. That’s how a lot of games were back then, out of the blue originals with fantastic story lines that weren’t formulated by marketing focus groups or quantitative data about what target demographics want. Skyfox and the games like it were pure imagination.

I still have this game in the original box, that’s quite an accomplishment seeing as I probably got it around 1987 or so. I don’t play the original for fear of wearing this treasure out (that’s how I feel about all my originals), so I’ve been playing Skyfox on my VICE emulator. 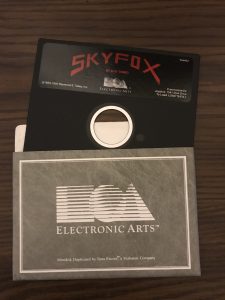 This game is challenging but fast paced enough to keep you going back after each death. Lots and lots of enemies to kill, not like some of the old simulators that make you fly around for virtual hours looking for something to shoot at before you run out of fuel. You do run out of fuel kinda fast in Skyfox and for some reason when you do you explode.

I think my favorite thing about Skyfox is the autopilot. When you can’t find enemies just push the “a” key and you get taken to things to shoot. I also like that you launch when you start in a totally Battlestar Galactica-esque launch bay thing (I feel like Starbuck). The graphics need a commendation too, they are as full color as the C64 is capable of and made to appear as 3D as possible. 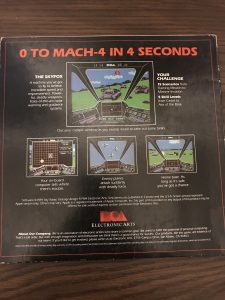 Since I have Skyfox in the box, it means that I must have purchased it at Toys ‘R’ Us (RIP), because I seem to remember it behind the plexiglass display with the tickets you pulled out to take to the register (I miss that method of buying games). I’m sure it cost $9.99, that’s what most of the C64 games cost at TRU in the late 80’s because they were blowing um out. C64 games took up valuable shelf space in a world where NES and SEGA were just beginning to dominate. 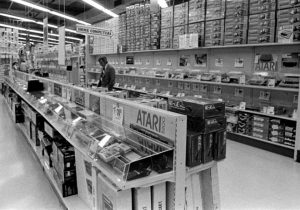 The way the computer isle looked back in the 80’s at TRU.

When Nintendo took over it was the end of an era but the beginning of a new one. The C64 began a decline at the dawn of the NES era so games like Skyfox became less and less prevalent. When Nintendo began its takeover it restarted a system of homogeny of games that temporarily stifled the eclectic nature of the game industry as a whole. For a little while there wasn’t room for the out of the blue originals like Skyfox. Now we live in a world where variety is endless. However, I think that the reign of Nintendo–while it revitalized the industry–may have had the unintentional effect of killing the untamed imagination in games of the future. I’m just speculating but almost all games, commercial or independent, today seem to lack that unleashed creativity that was present in the early days. It’s probably just a function of an art form maturing and there are bound to be periods to come of games that are new types of expression–the art form is very new by historical standards. Projects like Pico-8, I think, are bringing new unfettered expression to video games. We shall see. All academic discussion aside, Skyfox is worth a go on your favorite C64 emulator. Maybe you’ll get farther in it than I have so far, maybe you’ll see what I mean by unfettered creativity, or maybe you’ll hate the game and call me a liar. Whatever the outcome, may you save the base from the enemy always.