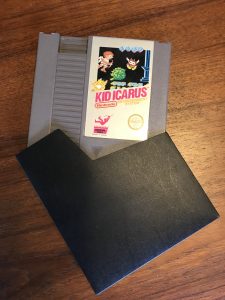 My Copy of Kid Icarus.

A seriously hard game that came out for NES around the same time as Metroid. Actually, I think they came out at the exact same time but whatever. The first time I saw Kid Icarus I was at a friends house–I always checked out the best games at friend’s houses–and we called it, Kid Ic-are-us because we didn’t realize it was a shout out to the Icarus of Greek mythology. I was amazed this game when I first saw it, the graphics were astounding, and the gameplay was fun and original. But it was hard as hell, and even as a tween I wasn’t all about playing video games at the expense of all else, I mean this was puberty onset time and girls were getting particularly interesting.

In my tweens, girls and video games hadn’t made the full meld that they have today. I mean its not unusual to find gamer girls today who ride skateboards and call themselves nerds, as in: “Oh my god! I’m such a nerd!” Quick side note, if you say “Oh my god! I’m such a nerd!” you aren’t a nerd. I’m a nerd. Playing some video games on your X-box does not a nerd make. If you know what apt-get install mame means than you might be a nerd. I should do a “you might be a nerd” list.

Back to Kid Icarus. It was always something of a gold standard for me. I never got a copy in my youth so my experience with it was limited. That made it this totally mysterious and attractive game that I always wanted but never really had the opportunity to get into. It’s kinda like when you’re a NERD and the pretty girl never talks to you so you build up this idea that she’s really rad, then you grow up and date the pretty girl and realize that the REAL nerd girl was the best choice after all. Not that that’s what happened to me 🙂

Anyhow, Kid Icarus was the pretty girl because I bought a copy on eBay years later, like five years ago, and started playing it, and found that it’s way too hard to be worth the effort of finishing. But it’s a fun game and cool, and if I had unlimited time on my hands–and I don’t–I might spend my days attempting to kill Medusa or whatever the ultimate goal of the game is.