Tapper and the way it was

Today I want you kids in the audience to get a picture of what it was like growing up in the 80’s video game wise and do it with one of my favorite games, Tapper. Video games in the 80’s were pretty rad, but they were especially rad in the arcade. They weren’t as rad at home even if you had Colecovision. I’m talking early 80’s here like 83 (I would have been 9). I had an Atari 2600, and the deficit between a game you played in the arcade vs. the Atari 2600 version was pretty wide.

You don’t have those problems today. Today there are no REAL arcades–please don’t say Dave n Busters, that’s not a real arcade. The best games today are played at home on home systems that would have been considered science fiction miracles or world domination level supercomputers back in 83. During my formative years you did what you could to get anything that resembled the rad games in the arcade. Tapper is an excellent example of how this went down. 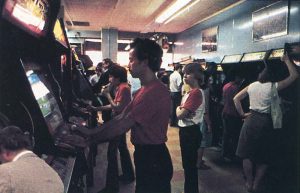 As a kid you went down to the local arcade–my favorite was called Westworld–and you played some cool game, one of them was Tapper. Tapper looked like this when you played it: 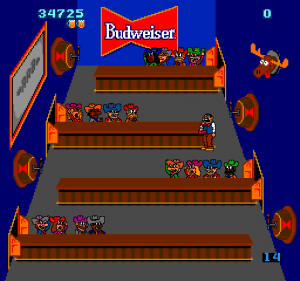 This is ARCADE Tapper.

Pretty cool right? Probably as good as it got in 83 as far as graphics go. Next you were out and about at a store that sold games (Toys R Us, SEARS) and you saw TAPPER, the game you just played in the Arcade the other day. Wow! If you had an Atari you would be able to play Tapper at home! 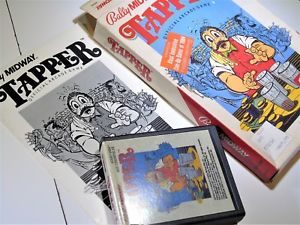 If you were smart you would look at the back of the box and see what the graphics looked like, if not you were in for a surprise…

And to be honest you didn’t care. These were very good graphics for a home system, the game played… er, kind of the same, maybe slower with less embellishment, but it played about the same. This was the way it was, and when other game systems began to become available the goal became to get games that were as close the their arcade counterparts as possible. You could never quite do it, but you tired. Colecovision was better, and Atari had the 5200 that was better, but you never did get the full arcade experience. Until… Nintendo.

I’ll leave that for another day.

← You down with LCP?
Random NES game from the pile… Kid Icarus →