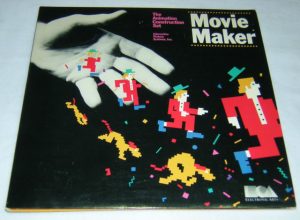 Long ago, when processing power was slow and we didn’t realize it because 1 Mhz seemed fine. And back when I thought a hard disk was a 3.5″ floppy, because it was hard and not floppy. And back in a time when swapping floppies was just the way it was and you could still talk to an operator on the phone… There was Movie Maker. I mean Photoshop was still in B&W and you had to have a very expensive Mac to run it. And although Amiga blew everything out of the water, only professionals had what it took to to do actual computer animation. And so, there was this little retail software tittle that came on four floppies calls Move Maker, and it was actually fairly good when you consider the era. 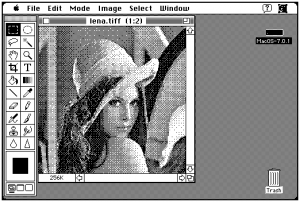 Photoshop back in the day.

I had a copy of Movie Maker as a kid, and I’ll tell you right now that I could NEVER figure out how to use it. It’s not that it’s hard to use, it’s just that when I was a kid I was dumb as a bag of hammers and anything that involved reading any type of instructions was out of the question for me. So I looked at the pretty box and played Ultima IV instead. The funny thing is, I always looked at Move Maker as a sort of aspirational title that I would someday utilize to make great C64 movies. I never did, until today.

Real quick, I’d like to point out that I’m good with modern multimedia tools. I’m professional level with the Adobe Creative Suite, and have created designs and animation for a number of years. Still I’ve never quite reconciled my failure to ever do anything with Movie Maker. This morning I got a hair up my ass to go ahead and try to figure out how to use it and see what I missed all those many years ago.

So I found the disk images at this website, and the manual at this one, and I proceeded to figure out how to use Move Maker. It’s not that tough. The only really annoying thing is that you have to swap disks all the time because back in the day a 1541 floppy drive disk held like 300K or something and we take for granted our incredible data storage capacity these days–there are micro SD cards that can hold 500 hours of video. A snapshot of the Movie Maker movie I made.

I followed the tutorial in the Movie Maker manual and I was able to make a very simple little video complete with scrolling titles a background image and an animated robot with blinking eyes. I think I could do a lot more with this program it I took a little time to get the hang of the workflow, but it is very tedious for pretty mild results. The thing is that this gives anyone who wants to bother with it a very authentic 8bit movie experience. Authenticity is the key here rather than performance. And sometimes it’s authenticity your going for. As much as digital photography has taken over the world, you still can’t beat the authenticity of a film photo. Sure everything is better about a digital picture, but I think it’s the flaws in our analog world that make things really beautiful. In the same way an 8bit movie made on an 8bit computer (emulator) with all the flaws and limits that are native to the scheme has a certain something that no amount of simulation can achieve.

I’m looking at Movie Maker a lot like I did when I was a kid. I see potential. Maybe I won’t make a full length animated 8bit movie, but maybe I’ll make some delightful shorts that capture that bygone age of disk swapping and telephone operators.

← Atlantis
You down with LCP? →