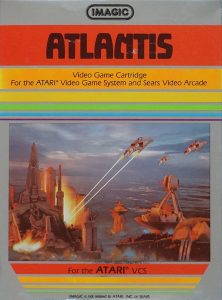 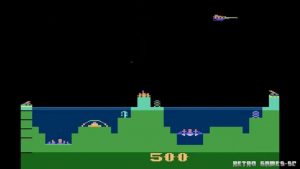 Atlantis is a game about protecting a city, the city is Atlantis. It’s pretty much left to the players imagination as to why the city is under attack and by whom. The enemy is a lot of flying attack vehicles, maybe spaceships or something, that eventually use some sort of destruction ray to destroy city buildings if they get get to a low enough altitude. If you loose all your buildings then you loose. The buildings appear to be under water and I imagine that’s the Atlantis part of the story. As a player you are in charge of three defense guns that protect the city. The center gun shoots straight up and the other two shoot diagonal

In all honesty this is a super simple game with very little variation. It just gets harder and harder as the enemy ships get faster and more abundant. The strength of the game is not the game play, it’s the potential for the players to use their imagination as they play. I think that’s what’s missing from the really advanced games we have available today. The insane lifelike worlds that get created now leave little for the player to imagine. But a game like Atlantis left everything to be imagined and as a kid I did just that, and I still do when I play the game today.

Here are some of the things I’ve always wondered or thought about while immersed in protecting the city:

Is this enemy ship a side view and it looks like a Star Trek Federation ship, or does it have a transparent round pod on the front? I like to go with it’s a round transparent pod because I like crap like that.

Why are the attack ships so freaking huge? I mean they’re like the size of buildings and they have more than one window on the side. They look a little like Star Wars Star Destroyers or something. I like to imagine that this invasion is on a capital ship scale because the invaders are from another planet and this is their attack/colonization force.

Who lives in the small size buildings? I like to imagine that these are exclusive condos where the crème de la crème of Atlantis live up in the hills near the water surface, and the main defense gun.

These are just a few of the musings that always come up when I play Atlantis. All in all I love this game. I might play it now!

Stella Atari VCS Emulator (So you can play Atlantis)