Game of the Week – Ultima IV 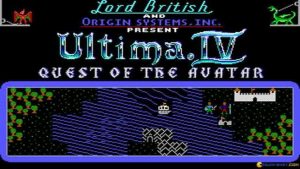 I noticed that I keep bringing up Ultima IV is mentioned in at least a few of my other posts. The reason I keep bringing it up is that it is one of those games that was super influential in my computer gaming life. I’m going to qualify things real quick, I never ever finished Ultima IV… Not even on an emulator. The simple fact is that I don’t have time for that crap. It is a serious commitment to finish a game like Ultima IV, and a lot of that time is spent in somewhat tedious combat scenarios that are extremely slow. BUT, if I had the time I would for sure go ahead and finish this bad boy up, become an Avatar and kill the final monster or whatever. It’s called Quest of the Avatar, so that’s why I said become an Avatar because that’s pretty much what you’re there to do. 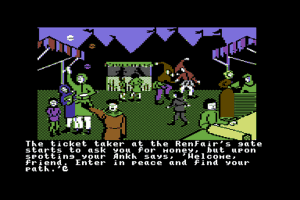 The real strength of Ultima IV is that it’s an extensive playable world with dungeons and castles and towns and you can talk to people and fight and sail around in a ship… For a game released in 1985 it’s fairly extensive and full featured. I never owned Ultima IV but I had a Commodore 64 buddy who did and he was generous and let me borrow it quite a bit–eventually when we discovered software that could overcome copy protection he made me my own copy! And I played it and never finished it, but still loved it.

I guess it’s just one of those things that you like to have around or know exists, even if you never actually use (or play) it. You know, like your ice cream maker, cool to have. But unlike the ice cream maker I would never get rid of Ultima IV at a yard sale. Today you don’t have to own anything physical to play Ultima IV, all you need is a good C64 emulator–I think the C64 version is the best version–and some disk images. Oh, and you need the maps and all that crap too in order to have the full Ultima IV experience. 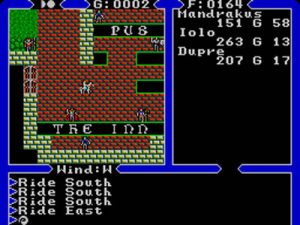 I have played all of the Ultima games through IV. They were created by a guy who called himself Lord British and who’s real name is Richard Garriott. Richard is now a zillionaire, but before that he created a little game called Akalabeth: World of Doom back in 79. That led to Ultima I (I have finished that game), Ultima II, Ultima III, and then …. Ultima IV. There are more after that and Garriott’s company, Origin, is well known for producing one of the first graphical multi-player worlds… Ultima Online.

Regardless of all this Ultima, the one I like best is IV, I think that was the pinnacle of Ultima technology, the ultimate Ultima. But it wasn’t the ultimate because there were a bunch more, but for me IV is where it ends. Go check it out.