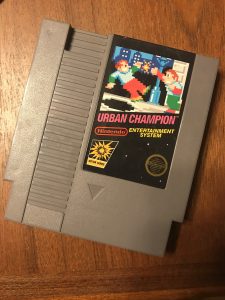 I picked a random NES game from my NES pile and… It was URBAN CHAMPION. What can I say about this game? It was my first exposure to the word “Urban” for one thing. I remember when I first saw this game in action. NES was new in the US, we kids were being bombarded with zillions of NES commercials on television that touted this new game system that had a light gun, Super Mario Brothers, and a robot. If you weren’t a kid in the 80’s you might not understand the gravity of this trinity. Today we live in the age of instant technology miracles and most kids and adults are a little desensitized to innovation. However, in the 80’s the only place you could play most good video games was at the arcade (the one I went to was called Westworld). There were light guns at the arcade but NOT at home. There was Super Mario Brothers at the arcade but NOT at home. No video game systems had robots. Actually video game systems today need more robots, but I digress. I did not have a Nintendo Entertainment System when they came out, but my rich friend did, and that’s how I was introduced to Urban Champion.

“Urban Champion Sucks!” That’s how my rich friend described it when we were in the third grade and he was introducing me to his NES with light gun and robot. It was hard for me to believe that any game on this thing sucked, but actually when you compare the other NES games to Urban Champion, you kinda understand why my school chum thought it sucked. It’s really not all that fun in my opinion, and the gameplay is a little clunky. Today I like the game because it’s nostalgic for me to look at it and remember the days when I was amazed by a system that allowed you to play Super Mario Brothers in your living room (or in my case; your friends living room). 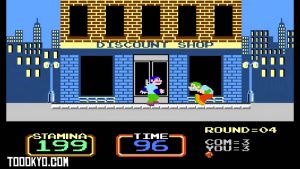 I guess I should say something about Urban Champion gameplay … You fight with another guy in the street and if you can knock him down into an open manhole, all the better. It’s from the days just before street fights became extremely dangerous and hoodlums had pocket knives rather than uzis. Things changed rapidly after 1985 or so, or maybe I just became aware of the horrors of the world after that time, or perhaps I’m not remembering clearly. I don’t know. I do know that I played very little Urban Champion, and I still play very little Urban Champion. I own it though, so in the end I guess Urban Champion punched me down the open manhole and won.