Game of the Week: Moria – Best Graphics Ever 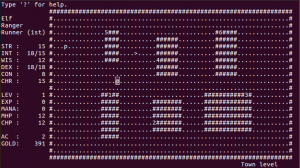 Moria, it’s not pretty, but depth… it has depth. You know how you’re mommy told you that you don’t have to be the best looking kid at prom because you’re special? My mom didn’t say that either, but if I was Moria she would have. Moria is special.

Moria is special because it’s deep, way deep, not deep like graphics simulations that simulate the physics of leaves blowing in the wind, but it’s deep like a good book… No, scratch that, a GREAT book.

Moria is an RPG, to be exact it’s a dungeon crawler. I consider dungeon crawlers to be RPG games because you play a character that has stats and fight things and collect treasure and need to eat… Moria has a lot of options, and because it was created in the early 80’s for Unix systems it’s for text game nerds like me.

That’s why I picked Moria as the Sunday game of the week, because it sparks the imagination and so has the best graphics available that use the same chipset you use when you read a book, your brain.

Maybe this game isn’t for everyone, to be honest the first time I played this game was back in the early 90’s when the Internet was fresh and new and mine was a command line through a service called Netcom. This is one of the first games I ever downloaded on the Internet. The description said it was an adventure RPG with endless dungeons. I was imagining some sort of Doomlike game with 90’s graphics and 3D stuff and all that. I should have realized that the limited bandwidth that allowed for game downloads would not accommodate anything with graphics (my computer had a 117 Mb (Megabyte) hard drive and I was using a 14.4 modem.

I was a touch disappointed when I booted Moria up and all I got was some lines of text. But as I read the lines of text I realized that this was basically D&D in a text based world, and being a huge fan of the Ultima series, I gave this ugly duckling a go. Needless to say I love the game to this day and you probably will too if you give it a chance. Do I sound like your mom on prom night talking about the date you didn’t want to go with, but were forced to because he/she was the son/daughter of your dad’s boss? I have a wild imagination and that’s why Moria has the best graphics ever.