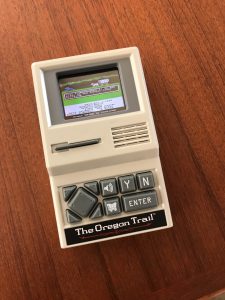 The Oregon Trail was as much of a pioneer in computer game history as the American pioneers that it seeks to simulate. Back in 1986 when I convinced my parents to go into debt to buy me a Commodore 64, one of the selling points I used was that the computer came with an educational game. That game was MECC Expeditions, and in that collection of  educational games was Oregon Trail. I played the crap out of it as a kid, but since I’m a Gen X’er and not a late Millennial, I never played the more full featured version that has recently been released as a relatively low cost handheld and is exclusively available at Target Stores.

That for sure didn’t stop me from buying one the very moment I discovered it in the Target toy section on a routine mission to buy deodorant–Target has cheap deodorant.  As soon as I saw this thing there on the shelf I grabbed it without a thought as to how much it might cost, and as I was hurtling toward the self checkout I calculated that as long as it was priced below say $50, I would purchase it.

Turns out it was a downright affordable $25! and I don’t regret the purchase at all, not one bit, it was worth every penny. Now I realize I must sound like a shill for Target with all this gushing moisture I’m dripping about this little toy, but I’ve honestly been waiting for someone to make something like this for years and I actually check the toy shelves at places like Target to see what the handheld situation is a few times a year. This year was a jackpot!

Like I said, I have been waiting for someone to make something like this for a while. A single game handheld that’s payable, color, adventure or rpg oriented, and easy for me to buy. Oregon Trail handheld fits the bill finally!

It’s a good little game. It plays well, you can save, you can turn down or off the sound, and it’s in full color. I’m getting a little older (Gen X), so the type is just a little too small for me but let’s be honest, that is a very “small” problem… get it? I crack myself up.

I’m sure the hardware hacking community is going to have a field day with this thing and hack the @#$% out of it. In fact I’ve already watched a Youtube video where a guy named Ben Heck takes it apart and puts it into a smaller box–he also hacks it by reading and writing to the eeprom. Personally I like the slightly bulky retro inspired box they put it in (the on switch is supposed to look like a floppy disk).

In conclusion, this Oregon Trail handheld is totally awesome. If you like crap like this you should go and buy it. Perhaps if this thing is a hit it will encourage more devices like it–I’d love to see an Ultima IV handheld (C64 version) … Did you hear that Target?

Game of the Week: Moria – Best Graphics Ever →